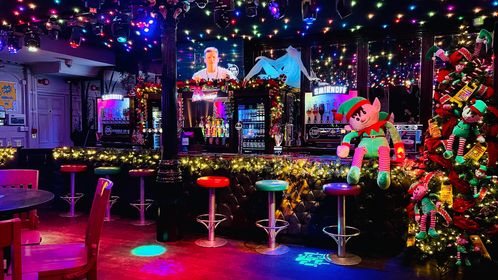 The Cliff Pub in Southend-on-Sea has been announced as the winner of the 2021 Best Festive Business competition following the public vote on the Business-on-Sea Facebook page.

This year, 54 businesses entered the competition, which received a total of 2,031 votes. The overall quality of entries was outstanding, highlighted by the high number of votes. The Cliff Pub, Hamlet Road, Southend-on- Sea, proved to be the public’s favourite, with The Inn at Belfairs of Eastwood Road North, Leigh-on-Sea, coming second, and Roslin Beach Hotel of Thorpe Esplanade, Thorpe Bay, coming in third.

This is the tenth year that Southend-on-Sea Borough Council’s economic development team has run the competition, which has three sponsors on board. Blatella Films, a Southend based firm and a long-standing sponsor for the competition, gifted The Cliff Pub, as first place winner, a promotional video production worth £500. Second place, The Inn at Belfairs, won a market audit worth £400 from local company withMichelle. On top of that, Federation of Small Business (FSB) are providing a free annual membership to all three businesses with the most public votes.

The winner and runners up were congratulated by The Worshipful The Mayor, Cllr Margaret Borton on Tuesday 21 December, with a certificate of achievement.

All entries to the competition can be viewed at Business on Sea Facebook page.

Cllr Ian Gilbert, leader of the council, said: “I would like to congratulate the winning businesses for this year’s Best Festive Business competition. We saw some incredible entries and as always it brought a bit of festive fun to the town, whilst also promoting the fantastic local businesses right on our doorstep.

“It’s been amazing to see so many votes this year, and I would like to wish all our businesses throughout the Borough a very merry Christmas and a happy and prosperous 2022.”

Roy Junior, manager of the Cliff Pub, said: “We’re overwhelmed with how many votes we received, it’s completely unexpected and we appreciate every single vote. We love to go over the top when celebrating the holidays, getting everyone involved and seeing everyone enjoy themselves.

“We like to see ourselves as more than just a pub, more like a community hub. People from all walks of life together enjoying themselves in a safe space. We’re also one of the last full time LGBTQ+ venues in Essex and hoping the prize from the promotional video from Blatella can help us reach out to more people who are yet to experience what we have to offer.”

The winners were decided by public votes on the Business-on-Sea Facebook page (@BusinessOnSea), where residents and visitors were able to vote for their favourite festive business.